America, The Emma is deeply troubled.  By the hate.

By all the hate that has been unleashed.  Since some (a few?) Americans voted for Mr. Trump.  Hate talk.  Hate acts.  Hate crimes.  The Emma DOES NOT approve of this, America.  Not.  At.  All.  Not to state the obvious, but The Emma is all about LOVE.  WHY THE FACE, AMERICA?  I may be (brilliantly, refreshingly) critical.  At times.  (Most times.)  But it’s all done with LOVE.  (Capiche, America?)

What puzzles me is this.  Mr. Trump is ALSO all about love.  I know because he said it.  Once.  At a rally.  Okay, he might have been smirking.  But The Emma  is pretty sure that Trumps does not have full control of his facial muscles (or his Twittering fingers), so I don’t put much stock in what he does with them. Anyway, for some reason the people who wanted Trumps to be president are celebrating with hate.  Instead of love.  (Or cake.  As God intended.)

So, now hate crimes are happening.  There are lots of mean words.  And lots of scribbling on walls.  But not scribbling pictures or poetry, the way The Emma does it.  (BECAUSE THAT IS ART, PEOPLE.)  Sometimes the hater does the mean talk on TV.  Or in the newspaper.  And sometimes the hater is someone who ran for president.  NO, not that one.  (It’s not always about YOU, Mr. Trump.) I’m actually talking about Mr. Ted Cruz.  Do you remember Mr. Ted Cruz?  In case you have been trying very, very hard to forget Mr. Ted Cruz– and it has been working– I will remind you.  (Sorry, America.  Did I say The Emma was all about love?  I might have meant TOUGH LOVE.)

Mr. Ted Cruz is the one who looks like Cousin Larry from Perfect Strangers . . . minus the crazy hair. 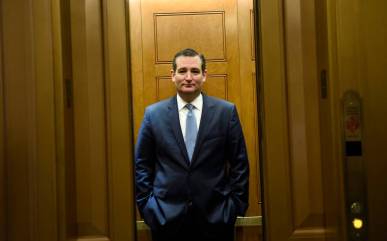 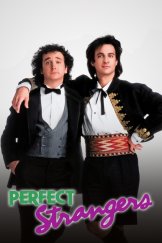 Cousin Larry wasn’t very funny.  Frankly, he was pretty annoying. But he set up the jokes for Balki, the character played by the captivating Bronson Pinchot (*swoon*).  In other words, “Cousin Larry” played the straight man.  HOW. APPROPRIATE.

Mr. Ted Cruz is a STRAIGHT MAN who is getting ready to hate crime America. That’s right, people, I’m verbing it.  He’s going to hate crime all over this beautiful country.  Now, America, you are probably saying, “But Emma, NO ONE wanted him to be president. He lost the primary.  Why do we still have to listen to him?”  Well, America, apparently even if most of the people in your own political party decide that you are, in fact, worse for the country than the Trumps, you still get to be senator from Texas.  Anyway, Mr. Ted Cruz is using his senator job to put forth a law called the First Amendment Defense Act.  (I should say, he’s trying to do this AGAIN.  It didn’t work the first time.)  This (possible) law is a hate crime.

OH HELLS-TO-THE-NO, MR. TED CRUZ.  How dare you take the name of The Emma’s favorite amendment and make it into something bad!?!  In case you are unaware, America, the FADA would let people or businesses discriminate against other people. If those other people happen not be straight.  Like Mr. Ted Cruz.

Mr. Ted Cruz is NOT all about love.

I’ll say this, America.  During my four long journeys around the sun, The Emma has learned a thing or two.   Put on your listening caps, because this one is really important.  Behind hate is often fear.  The Emma thinks that Mr. Ted Cruz is actually AFRAID of love.  (The Emma suspects that, for him, this is not an issue that comes up too often.)  The Emma believes that it makes Mr. Ted Cruz frightened when a boy loves another boy or a girl loves another girl.  Why does that scare you, Mr. Ted Cruz?   THEY. DON’T. LOVE.  YOU. (Seriously, they don’t.)  Are you afraid that the awesomeness of their rainbow love will give them a sort of superpower . . . ? Perhaps strong enough to overthrow an authoritarian government run by a pyramid of insanely rich white men who are riddled with conflicts of interest and have no real mandate from the people?  HMM?

If not, why prevent them from hiring a decent caterer for their wedding?  (To take just one example.)

I’ll be honest, America (if I may slightly digress) The Emma has mixed feelings about weddings.  I find some of the traditions concerning.  Covering the bride’s face?  (THE EMMA DOES NOT BELIEVE IN WEARING ANYTHING THAT MAKES IT MORE DIFFICULT TO EAT CAKE.)  Giving the bride away?  (OFFENSIVE.  AND SHORT-SIGHTED. DON’T BE SO EAGER TO GET RID OF THE ONE WHO IS IN CHARGE OF TELLING THE CATERER WHEN TO SERVE THE FOOD.)  On the other hand, The Emma appreciates the opportunity to wear a fancy dress.  And, the Emma also appreciates the glorious concept known as the “wedding registry”.  (HELLS-TO-THE-YES.)   And therefore believes there is potential to make the wedding experience more egalitarian.

But back to my point.  Mr. Ted Cruz should not be pushing for laws that allow any business (or individual) to discriminate.  To effectively prevent someone from hiring the caterer of their choice for their wedding.  Or the best florist.  Or the most qualified troupe of balloon-twisting, fire juggling, unicorns. (Just give it a minute to let the brilliance sink in.)  Mr. Ted Cruz should not be opening the door for discrimination.  Encouraging discrimination.  Indeed, encouraging fear and hate.  NOT ACCEPTABLE, COUSIN LARRY.  NOT ACCEPTABLE.  NOT IN MY AMERICA.

The Emma thinks America could use a bit more love.  Right.  About.  Now.  So, the Emma is sending you all a big Emma-sized-hug, America.  (But not a kiss, because kissing all of you would just be inviting trouble during the cold and flu season.  I’m sure you understand.)

Oh, Mr. Trump.  You’re not even in the White House yet.  And already a lot of people want to put you in a time out.  Don’t panic.  The Emma is here to help.

First problem: you have been talking. A LOT.  Which should be good thing.  (Better than Twittering.)   But take it from The Emma.  Talking can get a kid into trouble.  Sure, when you’re a baby EVERYONE wants you to talk.  They get all excited and jump-up-and-down-y if you say one word.  (*eyeroll*  AMIRIGHT, Trumps?)  But then you get a bit older.  And learn more words. (Like braggadocious.)  And all of a sudden people don’t always want you to talk.  “Quiet down, Emma, it’s time to go to sleep.” “Don’t talk now, Emma, I’m trying to talk to Daddy.” (Seriously, Mommy: PRIORITIZE.)  “Not now, Emma, I’m trying to brush your teeth.”  WHICH.  IS.  IT.  PEOPLE?!?  Cuz if you don’t want me to talk, I’ve been working on a few non-verbal gestures I’d like to test drive . . .

Mr. Trump, I understand your confusion.  Talking to people is part of your job.  So why is America all upset?  Let’s review.

Then you had a chat with the boss in Taiwan.  And that made the boss in China mad.  (Really. Mad.)  Because the boss in China has made it clear that Taiwan is just a figment of our imagination.  I understand your confusion on this one, Mr. Trump.  Because Jacob tells me the same thing about unicorns.  And I have had the pleasure of playing with both unicorns AND people from Taiwan.  (Not at the same time.)  THEY’RE. BOTH. REAL.  No matter what the boss in China says.

You have also been talking to Mr. Bannon from the Alternative Right. (Mommy, isn’t the alternative to right “left”?  FINE.  You don’t have to yell.)  And talking to Mr. Bannon has made everyone (with a sense of decency) mad. Do your breathing, America.  That’s it.  In.  Out.  (If you need to use a non-verbal gesture, go ahead.  The Emma approves.)

All this talking hasn’t really worked out so well.  Politics are confusing aren’t they, Mr. Trump?  First everyone tells you that you do too much mean talk.   (Okay, The Emma might have been one of those people.)  So you try to use nice words.  And everyone just gets EVEN MORE UPSET.

Maybe the problem isn’t so much what you’re saying, but who you’re saying it to.  Maybe if you want to be the President-Of-All-America, you should start by using some of those nice words with the people who DIDN’T vote for you.  Or support you.  You know who they are.  The ones who live in the edge pieces of the country puzzle.  (And Nevada.)  (And Colorado.)  (Don’t forget about Minnesota.  Though they may actually speak Canadian up there.  So maybe bring a translator.)

For example, it was good that you talked to Mr. Al Gore.  About climate change.  Even though you don’t really believe in climate change.  (Or people who win the popular vote.)   This was a good start, Mr. Trump.  But I think  you lost your chance at a gold star the next day when you chose Mr. Scott Pruitt to be the boss of the EPA.  I’m not sure if you know this Trumps, but the “E” in EPA does NOT actually stand for Emma.  (An outrage.  I know.)  It stands for “environment”.  And, as you know, Mr. Pruitt hates the environment.  (Why, Mr. Pruitt, WHY?  Did a pine cone bully you as a child?)  You know what the environment is, don’t you Mr. Trump?  It’s trees.  And air.  And water.  And earth.  AND WE’RE RUINING IT.  And some day that will make it too hot to live here.  Mr. Trump, THE EMMA DOES NOT WANT IT TO BE TOO HOT TO LIVE HERE.  I’m finally starting to get used to this planet.  (And its people.)  I don’t want to have to move.

Here’s the thing, Mr. Trump.  You might not believe in climate change.  Mr. Pruitt might not believe in climate change.  BUT THE ENVIRONMENT BELIEVES IN CLIMATE CHANGE.  AND.  ITS.  DOING IT.  It’s kind of like when Mommy says it’s bath time.  And I tell Mommy that “No, it is NOT bath time”.  Which really should make it NOT bath time.  (I think you agree, America.) And I sit on the floor.  Doing my best frowny face.  And close my eyes.  So I can’t see the bath tub.  And cover my ears.  So I can’t hear the water running.  And for a few glorious minutes, Mr. Trump, it’s like it’s really not bath time.  But then it is.  How do I know?  Because I find myself in a tub of water.

And so will you.  Especially if you are at Mar a Lago when the polar ice caps melt.

Mr. Trump, global warming will happen even if we close our eyes. OPEN YOUR EYES, MR. TRUMP.  A bazillion scientists– AND THE POPE– aren’t wrong.  More importantly, The Emma IS NOT WRONG.  (Except occasionally about bath time.)

Last but not least, one quick side bar.  For the Boeing company.  Now I’m just talking to you fly-people.  I just want you to know that if Mr. Trump doesn’t want your four billion dollar (Air Force One) plane, The Emma will take it.  (Let Trumps go cheap on his ride.) AMERICA: I’M COMING.  Prepare yourself for The Emma’s Victory Tour.  And after that, on to Russia.  The Emma has a few words for Mr. Putin.  And a couple of non-verbal gestures.

END_OF_DOCUMENT_TOKEN_TO_BE_REPLACED 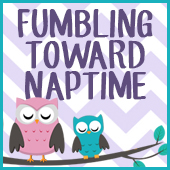