We moved last weekend.  Right after Jacob’s last day at preschool and before his first day of summer camp.  This was no accident. This is a child that needs to be kept BUSY.  Otherwise he starts tossing around the other “b” word.  (NO, not that one.)

“Going to this playground- AGAIN- is SO BORING”.

Curses to his preschool for introducing this word.  Early in the school year, they read a book called “I’m Bored”.  The take-home message was supposed to be that kids should never feel bored because there are so many ways for them to play.  This was not what Jacob took home. Ditto for his peers.  Instead they learned that one simple word could make an adult (who was probably ripping themselves away from some intensely gripping activity to entertain them) start twitching.  I can’t tell you how many conversations I had with the other parents that went something like this.

Other Parents: Is Jacob saying it too?

Other Parents: I’ve told my kid that she’s not allowed to use the word anymore.

Me: Does that work?

Other Parents (deflated): No.

My feeling is that, until a five-year-old has had to listen to a stream-of-consciousness monologue from, say, a two-year-old, while playing an endless game of Let’s-Pretend-We’re-Peach-Fuzz and listen to the two-year-old start the same sentence over and over again at least ten times and then completely forget what they were saying in the first place, the five-year-old DOESN’T KNOW WHAT IT MEANS TO BE BORED.  I’ll be honest and say that there are times when I’m talking to a child Jacob’s age and completely zone out mid-sentence.  But don’t want them to start over.  So, I just smile and nod.  And say something like “Wow!”  Which, frankly, is the response that most five-year-olds are pulling for about 80% of the time.  The odds are usually in my favor.

Okay, so you get the point.  Child.  Must.  Be. Occupied.  (Never mind, of course that his father and I work.) Thus: camp.  Don’t get me wrong.  We did lots of research about the camps in our new city.  And, after much consideration,  chose one we thought Jacob would really love.  A creative arts camp.  With arts and crafts.  And theater.  And lots of swimming.  And a rock wall in the gym.   Right up Jacob’s alley.   Several months ago, we signed him up.  And then began preparing.

For Jacob, this of course meant “informing” his friends that he was about to have the time of his life at camp.  (To be fair, these kids were also bragging to him about their summer plans.)  The fact that Jacob actually knew very little about his camp: totally irrelevant.

Jacob: I’m going to a camp with swimming!

Jacob: At my camp there is NO rest time.

Jacob: At my camp, we’re going to eat bacon!

What?? First off, this camp is run by the Jewish Community Center. Not so much with the bacon.  And secondly: bacon??  Where the hell did that come from?

Anyway, while Jacob was busy spreading the gospel about his camp, we were preparing in other ways.   Filling out the paperwork. And medical forms.  And labeling EVERYTHING.  The camp stopped just short of suggesting that if we didn’t write Jacob’s name ON HIM, they could not guarantee that we would receive the correct camper at the end of the day.  So, there I was, a few days before our move.  Ironing labels into all of Jacob’s clothing.  Shorts.  T-shirts.  Swim suits.  And just in case there was a cold day, pants.  I refused to label his underwear.

He was wearing another kid’s shorts.

Both Jacob and his counselors were completely oblivious.

So, here’s a teensy glitch in the label-everything-approach.  I can label everything until the cows come home but it won’t do much good unless ALL THE OTHER PARENTS DO THE SAME THING.   Whatever.  (One the positive side, the shorts Jacob was wearing were a great match with his shirt.)  When I explained the situation to Jacob’s counselor, he was very apologetic.

Counselor: It must have happened when the boys changed after swimming.  I’m in there with five of them so it’s hard to keep track of everything.

Then his counselor offered this.

Counselor: Actually, he almost switched underwear with another kid but I made sure they switched back.

Excuse me while I go bleach EVERYTHING. JACOB. IS. WEARING. 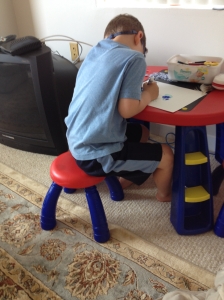 Jacob after his first day of camp . . . wearing some other kid’s shorts

Camp Day #2 (Tuesday).  Jacob had another great day.  Swimming, art activities, planting seeds in the garden.  And, just when you thought it couldn’t get any better, “Mommy, we had POPSICLES for snack”.  It is possible that this child will soon start refusing to come home.

Jacob’s counselor, however, had a more tempered assessment of the day.

Counselor: Jacob did a great job listening during the swim lesson. But, he had some trouble listening when we were getting ready for swimming.

The counselor seemed tired.  Tired the way a seventeen-year-old might feel after spending two days with a group of five-year-olds who have suddenly realized that they grossly outnumber him when alone in the boys locker room.  (Without the two other female counselors there for backup.)  Tired the way said counselor might feel when he has barely, by the skin of his teeth, suppressed an all-out-mutiny by a group of would-be-pre-k-overlords.  That kind of tired.  I felt for him.

But by the same token:  WHAT KIND OF BEDLAM IS GOING ON IN THAT LOCKER ROOM?!?

Camp Day #3 (Wednesday).  I had another conversation with the same counselor at pick-up time.

Me: How did things go today?  Was he a better listener?

Counselor: Oh, yeah.  It was a great day.  He did really well.

And then we proceeded to have a conversation about how well my child did getting ready for swimming.  Which would all have been very reassuring.  Except that, at the end of the conversation it became clear that the counselor was talking about some other kid.

Tomorrow, we are going to get Jacob’s name tattooed on his arm. Not sure what to do about Emma.  She is not old enough to go to camp yet.  But she comes with me to drop Jacob off and pick him up. And keeps toddling around introducing herself to people as “Jacob”. 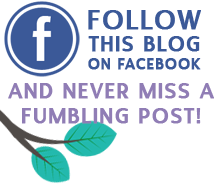